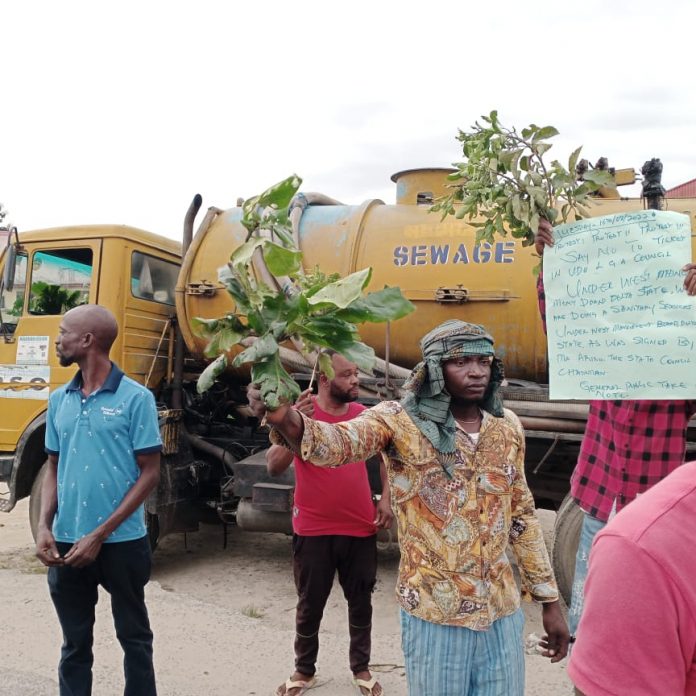 Sewage operators on Tuesday made good their threats to stage a peaceful protest against the authorities of the Udu local government area of Delta State over what they described as daily illegal levy imposed on them and vowed to resist it.

According to the protesters, all attempts to meet with Udu local Government council Chairman, Chief Jite Brown in order to address the alleged illegal levy proved abortive .

It was gathered that other local Governments in the state were not collecting the said amount from them.

The Delta State Chairman of sewage operators, Comrade Efeturi Otu, while urging members to be peaceful and law abiding, disclosed that the Five Thousand Naira daily ticket imposed on them by Udu council is sold to them by suspected thugs who are agents to the council.

Comrade Efeturi Otu who spoke at the front of the blocked Udu local government Secretariat by his members, revealed that most times the council agents seized their truck batteries and manhandled them, saying enough was enough.

Others who spoke lamented that Udu local Government council did not provide dumping ground for them and wondered why the Authorities of the Council decided to levy them the sum of Five Thousand Naira daily .

They revealed that Delta State Road Transport workers Union have dropped their own tickets which they were collecting from them since they are the ones paying for their dump site .

They asked the Udu council chairman to provide them with approved dump site, saying that they were ready to pay the Five Thousand naira since they were already committed to the payment of the levy
to private owners of dump sites.