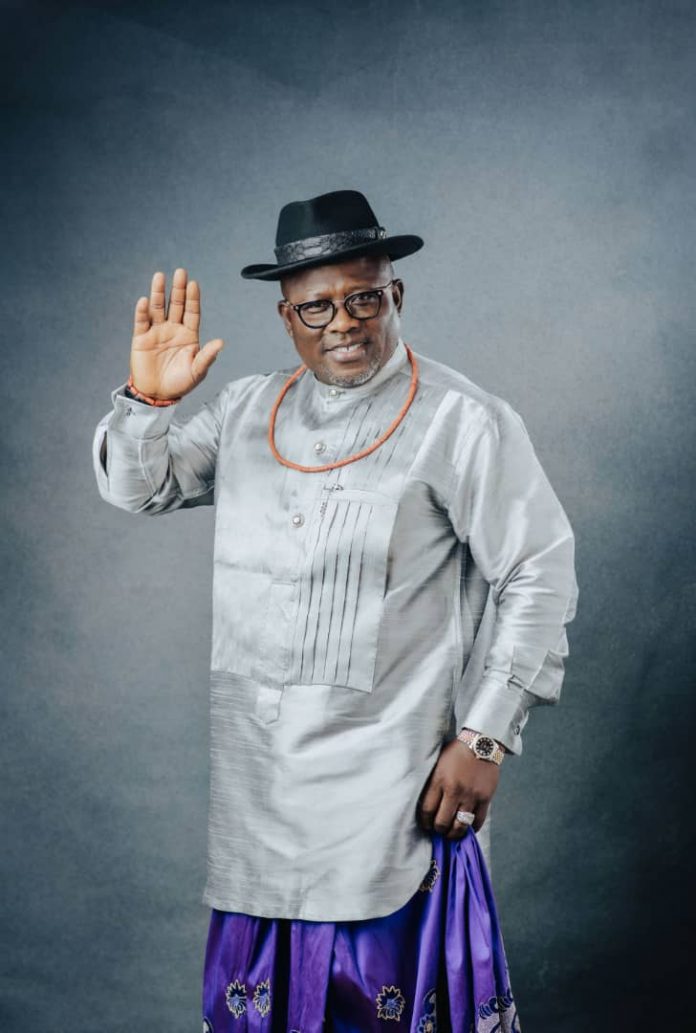 Our attention has been drawn to ‘Forensic Report’ being circulated in print and social media by one Evance Ivwurie, a known supporter of Chief David Edevwie, who came a distant second position in the primary election conducted by the Peoples Democratic Party (PDP) on 25th May, 2022 to elect its candidate to contest the forthcoming Delta State Governorship election in 2023.

Following the landslide victory of Rt. Hon. Sheriff Francis Orhowedor Oborevwori, Speaker of the Delta State House of Assembly as the winner of the election, Evance Ivwurie has led a pack of attack dogs in a series of failed efforts to discredit and tarnish the image of the candidate freely elected by the delegates of the party in a free and fair contest.

The ‘forensic report’ is the latest in a series of publicity stunts hatched by Evance Ivwurie and aimed at discrediting the candidature and good reputation of the Rt. Hon. Sheriff Francis Orhowedor Oborevwori.

To further his obnoxious goal, Evance Ivwurie has filed a criminal charge in his personal name and private capacity at the District Court, Abuja, wherein he alleges a case of identity theft against Rt. Hon. Sheriff Francis Orhowedor Oborevwori. The ‘forensic report’ which he is circulating is allegedly the proof of his allegation that Rt. Hon. Sheriff Francis Orhowedor Oborevwori stole the identity of another member of the Oborevwori family known as Francis Oborevwori. A colossal joke and an indication of the unhealthy desperation of Evance Ivwurie and his sponsor.

The ‘Forensic Report’ is the product of one Chief Reginald Udunze, who described himself as a DSP (Rtd) and Chief Consultant of Apex Forensic Nigeria Limited.

Opponents of Oborevwori would like to con his supporters and unsuspecting members of the public into believing unfounded allegations of identity theft. However, a closer examination of the report exposes it as an unreliable document prepared by a “hired gun”. It is neither independent nor credible and should be disregarded in its entirety. We draw the attention of independent thinking members of the public to the following.

Any IT hardware and software used for the viewing, processing, and analysing of imagery for a Facial Image Comparison must be fit for purpose and validated for its intended use. At the barest minimum, this validation should state if the process results in any visual loss of quality to the displayed or outputted imagery and if this loss impacts the subsequent examination and comparison. It is this information that gives the process credibility.

The report states that the analyst used a QDX630B Spectral Comparator and Highly Illuminating F OX VM Multimedia Computers and other Scientific Apparatus. Therefore, we urge members of the public to do a simple internet search to research the use of the listed equipment.

Firstly, a Spectral Comparator is not intended to be used for a Facial Image Comparison. Instead, it is used to detect imperfections in documents. It does so by using electromagnetic wavelengths and various filters to differentiate inks and reveal hidden material on documents.

Thirdly, what other “Scientific Apparatus” did the examiner use? He did not specify it because he has not deployed any specifically designed equipment for a facial image comparison. The whole exercise is arbitrary and a sham. It is designed not to project the truth but to embarrass a candidate that the opposition fears and to deceive members of the public.

The examination of documents includes detecting alterations and obliterations, analysis of paper, detection and examination of forgery, origin, determining authenticity, and others. Members of the public should note that the examiner, Chief Udunze, does not say that any documents he examined were forged. However, with the greatest respect, Chief Udunze’s qualification as a forensic document examiner does not make him a facial image comparison expert.

Facial image comparison experts compare images of unfamiliar faces (i.e., faces not known to them) and decide whether or not they show the same person. Given the importance of these decisions for national security and criminal investigations, practitioners attend training courses to improve their face identification ability.

The “forensic examination” starts on the incorrect premise by presuming that the reference imagery was each taken at the same time, at the same angle and distance and of the same image quality. These factors can significantly affect the comparison.

The examiner did not use original photographs, but images submitted by Oborevwori’s opponents. He did not analyse whether these images were altered in any way.

As individuals grow and age, facial features can change significantly. The examiner does not account for this factor. The following are common features of adult ageing:

A significant amount of time between the images can limit the use of a facial image comparison. The examiner’s current conclusions are unreliable as facial features change naturally with age. Therefore, the examiner should have (but failed to) call for additional imagery within a closer age range.

Also, the first image submitted to the examiner was of significantly low quality, resulting in limited or, at worst, unreliable findings. The examiner did not perform an image quality analysis on any of the submitted photographs to determine:

• Blur within the image causing a potentially irrecoverable loss of detail

No independent verification of the exercise:

The fallout from the Delta State Governorship primary elections has been the subject of intense media scrutiny. For this reason, the examiner should not be exposed to imagery before conducting their comparison to minimise possible sources of bias, such as confirmation bias. This is why independent verification is key and accords with international best practices.

A second independent examiner should repeat the entire facial image comparison process to verify the result. There should have been a blind verification by the second examiner without knowing the conclusion of the first examiner. This prevents confirmation bias and preserves the integrity of the process.

There was absolutely no verification in this case.

For the avoidance of doubt, Rt. Hon. Sheriff Francis Orhowedor Oborevwori has never submitted any false documents as alleged or at all. Furthermore, he has not stolen any person’s identity as alleged or at all. Indeed, neither Evance Ivwurie nor any of his cohorts has brought forward the person they identify as the genuine holder of the identity. The reason for this failure is simple. All the photographs shown in the examination are of Sheriff Francis Orhowedor Oborevwori.

It is curious that a document apparently addressed to the Deputy Commissioner of Police, Guzape District FCT Abuja, has found its way to WhatsApp and Facebook, instead of the intended recipient. Equally curious is how a complaint of events allegedly occurring in Delta State has found its way to Guzape District FCT Abuja. Opponents of Sheriff Francis Orhowedor Oborevwori should test their popularity at the polling booth, not on social media pages.

The question is whether the so-called expert was able to bring out any other identity, in the course of his investigation, apart from that of Rt. Hon. Sheriff Francis Orowhdor Oborevwori.
The Oborevwori Family of Osubi, Okpe Local Government Area of Delta State is well known, and there is no other member of the Oborevwori Family named Francis. In the circumstances, Evance and his cohorts have the burden of producing the imaginary Francis Oborevwori, whose identity they claimed was stolen by the Hon. Speaker.

The Supreme Court has correctly found in plethora of authorities that in order to determine the authenticity or genuineness of certificates issued by Institutions, the best and conclusive evidence on this point is a confirmation or denial from those Institutions.

With the confirmations from the various Institutions as to the genuineness and authenticity of those certificates, we urge the general public to disregard those fake forensic reports in circulation, having not emanated from proper Institutions or Authorities.

We wish to recall that Chief David Edevbie secured a judgment from the Federal High Court declaring him the winner of the election and that the said judgment is presently the subject of a pending appeal before the Court of Appeal. Rather than await the decision of the Court of Appeal on the decision he secured from the Federal High Court, Evance Ivwurie and his marauding cohorts would undermine the pending Court process and engage in social media propaganda.

The general public and teaming supporters of Rt. Hon. Sheriff Francis Orowhedor Oborevwori should disregard the fake documents in circulation and await the pronouncement of the judiciary, which is the final authority on this issue.

DENNIS OTU, CHIEF PRESS SECRETARY TO THE HONOURABLE SPEAKER OF THE DELTA STATE HOUSE OF ASSEMBLY.