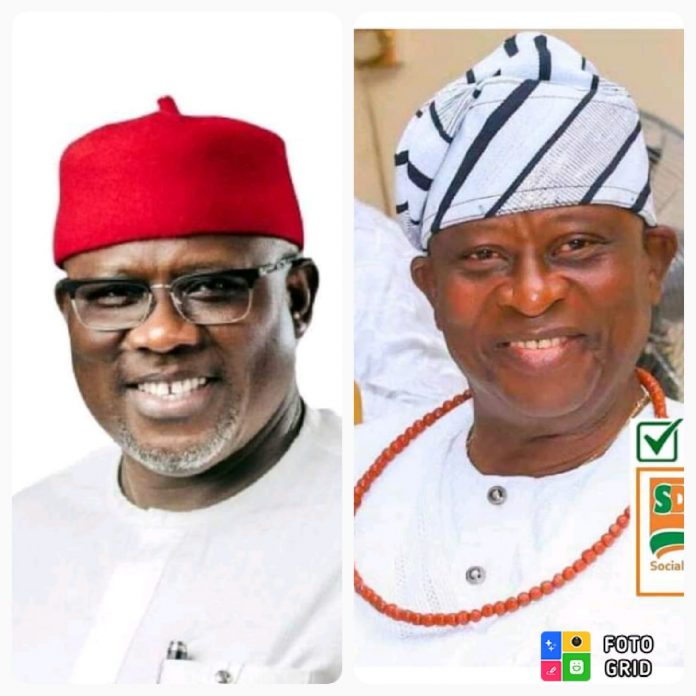 Olorogun Kenneth Gbagi is a notorious fabricator of cheap lies, calculated to fraudulently seek unmerited attention in the media space and for petty political reasons.

His stock in trade is to mislead, misinform and cajole gullible members of the public through inflammatory statements, stage managed press interviews and acute verbal diarrhea that is unbecoming of a self acclaimed industrialist and lawyer.

Gbagi’s companies neither declare annual profits nor can lay claim to visible corporate social responsibility. It has been alleged that his companies total workforce is in the region of a mere thirty eight employee; comprising hotel attendants at his moribund Signature Hotel, fuel attendants at a gas station and few drivers.

Gbagi has no industry or any manufacturing company in Nigeria but constantly ridicules himself by fraudulently claiming to be an industrialist. His hobby is “boasting and fabrication of lies” meant to dubiously oil his dry political ego. Gbagi is morally unstable and lacks integrity in all ramifications.

In his recent press interview, Gbagi in an attempt to fraudulently attract public attention to his dead and buried governorship ambition, decided to further compound his decaying ambition by framing laughable falsehood and propaganda against the vibrant and super excessive local content governorship candidate of the Peoples Democratic Party, PDP, in Delta State, Rt Hon Oborevwori Sheriff Francis Orohwedor, JP, the Ukodo of the ancient Okpe Kingdom.

He lied severally and jointly in the said interview by saying that he once visited Sheriff Oborevwori in prison when he was jailed for manslaughter, a complex lie that stinks to high Heavens.

He went further to say that one Ifeanyi had to ask Sheriff why he prevented Gbagi from exposing him, and so on and so forth. The said interview was stage managed, distasteful, mischievous, malicious and it escalated Gbagi’s low self esteem in public space.

Gbagi’s crooked and laughable verbal diarrhea via the press interview totally gave him away as a frustrated and confused liar, not fit to occupy the office of a Ward Councillor in a local government council. He is million miles away from being a state governor.

It has been revealed that Sheriff Oborevwori came in contact with Gbagi for the first time at Osubi Airport few years ago. Gbagi hired the services of an airport taxi driver, and in his usual gra gra style refused to pay the driver. On that fateful day, he was at the Osubi Airport to catch a flight; but he was not lucky to escape. Airport cab drivers held him hostage, preventing him from flying out of the airport. It was a shameful scenario.

Sheriff Francis Oborevwori, who was at the time the Community Leader of Osubi, had to intervene and Gbagi was made to pay his debt to the airport cab driver before he was allowed to board the airplane at Osubi Airport. It was that shameful. It was his benefactor, Sheriff that he had to blatantly lie against without remorse because of governorship election politics. Too bad!

The second time Sheriff got in contact with Chief Gbagi was earlier this year at the International Conference Centre in Abuja, during the wedding reception of one of the daughters of Delta State Governor.

Chief Solomon Ogba was also at the ceremony and the three of them (Oborevwori, Ogba and Gbagi) exchanged pleasantries and shared some political jokes during the wedding reception and that was all. They never had anything to do with each other till date.

It must be clearly stated for the avoidance of doubt that when Sheriff Francis Oborevwori, was already famous socially and politically in the early 90s, Gbagi was nowhere to be found in Delta State, he was studying Criminology in Philippine, and knew little or nothing about practical democratic politics.

Sheriff is a super local content politician with mesmerising street credibility that would obviously dislodge his opponents at the polls in 2023. Gbagi will certainly take the extreme back seat when the results of the governorship election is eventually announced in 2023.

Gbagi’s character assassination plot against candidate Oborevwori will further drown him in the deep blue sea of governorship electioneering politics. Deltans are solidly behind their Sheriffied crooner and have aligned with the M.O.R.E Agenda that would take Delta State to a higher level in terms of overall development of the three senatorial districts from 2023 to 2031.

It must be emphasised again and again that Oborevwori Sheriff Francis Orohwedor, was never in prison at any material time and Gbagi the famous liar could not have visited a free and bubbling man in prison. He lied from the pit of hell.

Oborevwori and Gbagi never shared any reasonable relationship that would warrant duty of care to each other under any circumstances, and the duo have maintained separate lane politically. Oborevwori is in PDP, Gbagi is in SDP, they are miles apart from each other as far as 2023 governorship election is concerned in Delta State.

Before the advent of constitutional democracy in 1999 and till date, Sheriff Francis Oborevwori has been a prominent household name, free as the air, going about his lawful and legitimate businesses, social and political activities in Okpe LGA and across Delta state.

In Gbagi’s crooked imagination he strongly believe that by assassination the character of other governorship candidates via the mass media, he would position himself to win the governorship election in 2023. This is where he goofed big time.

Gbagi does not have the required mental stability, lacks refined leadership character, integrity and discipline to oversee the affairs of his hometown of Oginibo, and he is certainly million miles away from the governorship race in Delta State. He is not in the political calculations for 2023 governorship election in the state.

Gbagi’s myopic reasoning and vain media propaganda had to a large extent rubbished and crumbled his crooked governorship ambition. His name attracts indignation, just as rotten meat attracts hurds of flies. It is dubious on Gbagi’s part to misinform and deceive the public via stage managed media propaganda, all in the name of governorship politics.

Gbagi and his SDP Party are political disasters in Delta State. They don’t even have membership register, no ward, no LGA and no State executives. Gbagi is all in all of SDP party in Delta State.

The governorship candidate of the Peoples Democratic Party, PDP, Rt Hon Sheriff Francis Oborevwori, will defeat Gbagi in his Oginibo town in 2023. This is the gospel truth. Gbagi will not win in Oginibo. He is politically irrelevant, a liar, a debased radical and he carries empty air of political inferiority complex.

There are strong indications that after the 2023 general elections, Gbagi and his SDP party shall again fade away. He lacks integrity and stable character which has been traced to acute mental imbalance and lack of self worth occasioned by poor boardroom skills, cut and nail native business sense.

It is very important to also state clearly that Sheriff Oborevwori will never engage Gbagi in media warfare or altercations, not today, not in years to come.

Gbagi is a perpetual trouble maker, a vicious propagandist, a bully, politically immature, a human right violator, oppressor of his workers/employees, deficient in character and above all, a serial chronic liar.

Gbagi is obviously not a reliable and responsible politician.
***
About the writer: Olorogun Dr Fred Latimore Oghenesivbe is the Leader of the Sheriffied Delta Media Group, Chairman, Coalition for Media Politics & Governance, CMPG, a Lawyer and Distinguished Fellow of the Chartered Institute of Information & Strategy Management, Dfcism, et al.