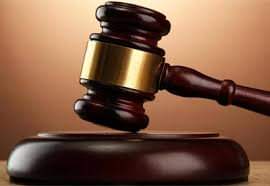 HRM King (Dr.) Charles Ayemi-Botu, Benson Agbai, Prestar kodokor and Chief Secretary Amgbara have filed a suit before the Federal High Court, for themselves and on behalf of Okpokunou Urban Community, in Burutu local government area of Delta state, urging the Court to grant certain reliefs against Shell Petroleum Development Company, SPDC operating in the locality.

In the writ of summons issued by Chief V. E. Otomewo, of V. E. Otomewo & Co, the claimants are seeking a declaration that Okpokunou oil field wherein SPDC carries out its oil and gas drillings, explorations, and operations; oil wells 1, 2, 3 and 4, HXWL and all the oil wells and installations within Okpokunou oil field situate solely within the area of land belonging to the Okpokunou Urban Community from time immemorial. 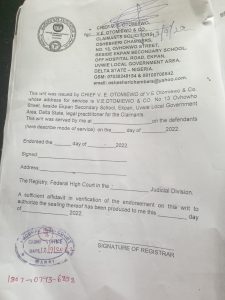 A declaration that with respect to the operations of SPDC in Okpokunou Urban Community, the claimants are the persons exclusively entitled to nominate and/or constitute the membership and/or fill the slots accruable to the host community of Okpokunou oil field and/or constitute the membership of the Board of Trustees of the Host Community Development Trust (HCDT) and/or any other body set up by and/or at the instance of SPDC in that regard.

A declaration that all the oil wells, oil and gas installations and operations being carried out by and/or at the instance of SPDC in Okpokunou oil field, are situate within Okpokunou Urban Community, the claimants are the persons entitled exclusively to all payments, compensations, surface rights and all or any benefit accruable to the host community of the Okpokonou oil field and/or emanating from SPDC by virtue of their operations in the said Okpokonou oil field

A declaration that any document executed and/or any agreement reached and/or entered in relation to the Okpokunou oil field and/or pertaining to the claimants, Okpokonou Urban Community as the host community of the Okpokunou oil field without the consent, authority and/or approval of the claimants, Okpokunou community first sought and obtained is illegal, null and void and of no effect whatsoever and howsoever. 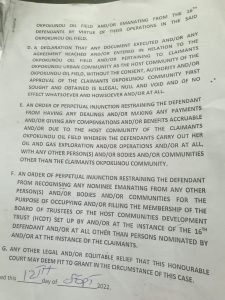 The claimants are also seeking an order of perpetual injunction of the Court restraining the defendant, SPDC, from having any dealings and/or making any payment and/or giving any compensation and/or benefit accruable and/or due to the host community, Okpokunou Urban Community, with and/or any other person, body and/or community.

An order of perpetual injunction restraining the defendant, SPDC, from recognizing any nominee emanating from any other person, body and/or community for the purpose of occupying and/or filling the membership of the Board of Trustees of the Host Community Development Trust (HCDT) set up by and/or at the instance of SPDC other than persons nominated by and/or at the instance of the claimants

The writ further urged the Court to grant any other legal and/or equitable relief that it may deem fit in the circumstance of the case. 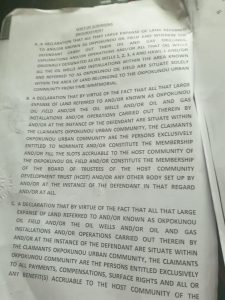 The Court has commanded the defendant to cause an appearance to be made for it within 30 days of service of the writ failing which the claimants may proceed therein and judgement may be given in the company’s absence.