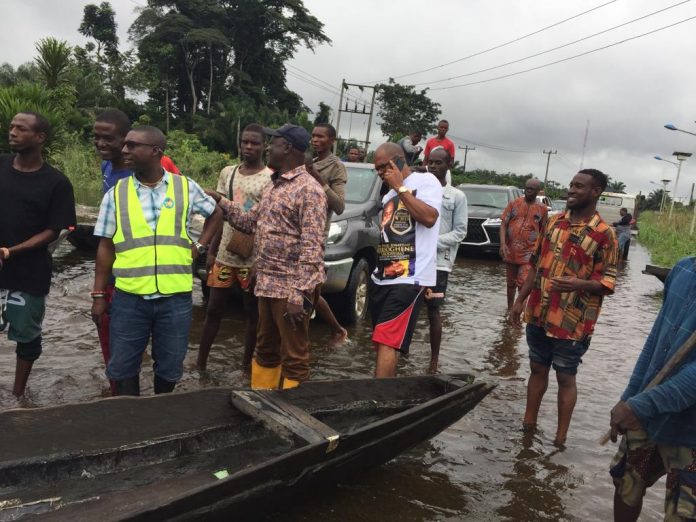 The Majority Leader and Member representing Isoko South 2 in the Delta State House of Assembly, Hon (Chief) Ferguson Onwo has visited victims of the rampaging flood in his constituency and expressed shock over the magnitude of the problem.

Looking so dismayed over the sad development, Hon Onwo, who doubles as the Chairman, Assembly Committee on Information, however expressed hope of an early end to the ugly situation, stressing that no constituents would be consumed by the rampaging water.

Accompanied by his wife, Anthonia; the State Commissioner for Environment, Godspower Asiewhu; Chairman, Isoko South, Victor Asasa and the PDP House of Representatives candidate for Isoko Federal Constituency in the 2023 general elections, Ajiri-Oghene Ukodhiko, the Majority Leader said this year’s flooding was becoming more devastating than that of 2012. 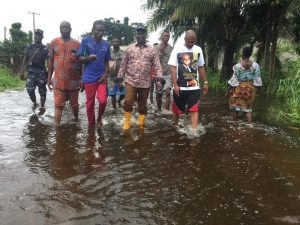 Onwo explained that hundreds of constituents have been rendered homeless, their economic life-wires destroyed, and properties submerged by flood, expressing worry over how the people would return to normal life endeavors after what is being experienced.

At the State Government’s Internally Displaced Persons, IDPs Camp in Oleh, Headquarters of Isoko South, the Lawmaker empathized with the victims and admonished them to remain calm and strong as that would help to overcome the traumatic situation.

He commended the efforts made so far by the State Governor and Vice Presidential Candidate of the People’s Democratic Party, PDP, Dr Ifeanyi Okowa, to cushion the adverse effects of the flooding, including setting up of the various IDP Camps across the affected council areas.

Hon Onwo sought the assistance of well meaning individuals and stakeholders, including corporate bodies operating in the localities, to ameliorate the negative impacts of the natural disaster, promising to continue to reach out to other agencies of government in that regards. 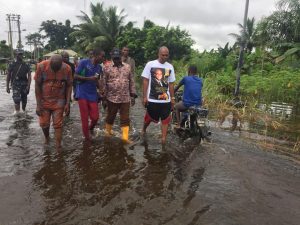 Hon Onwo donated food items, including bags of rice, beans, garri, noodles, beverages, toiletries, sanitary wares, cash and many others to the Camp.

The Chief Camp Commander, Mrs Elizabeth Chukwuora, speaking on behalf of the displaced persons, thanked Hon Ferguson Onwo, for the visit and the donated items.

The Camp Commandant also appreciated the PDP House of Representatives candidate, Ajiri-Oghene Ukodhiko and the Isoko South Council Boss, Victor Asasa who accompanied the Majority Leader to the Camp, for their financial support.

In a swift reaction to information that some communities in the constituency through self help had set up camps for those seriously affected by the flooding menace, including Uzere, Aviara, Igbide, Olomoro, Enhwe, Umeh and Erohwa, Hon Onwo and his entourage met with the various President Generals and representatives at the Olomoro town hall, also in Isoko South.

The Majority Leader who commended the communities for the proactive steps, said the visit was to contribute to the efforts by the people, and reiterated his earlier call on the relevant federal and state government agencies for urgent intervention.

Onwo presented some food items as palliatives to the community representatives for onward delivery to the different camps as part of efforts to reduce the negative impacts on the displaced persons, even as he regretted the pre-mature harvest lof their agricultural produce as a result of the ravaging flood.

The President General, Olomoro Community Chief Commander Samuel; that of Umeh, Mr Emamowho Simeon; the Councilor Representing Igbide Ward 07B, Blessing Emeakumor and others who spoke, paid glowing tributes to the Majority Leader for the show of love and support to constituents.

They said the gesture was commended and promised to always look up to him for direction.

The State Commissioner for Environment, Godspower Asiewhu, in an interview, said the State Government was not leaving any stone unturned towards reducing the negative impacts of the natural disaster on Deltans and residents in the state.

In their remarks, Chairman, Isoko South, Victor Asasa and the PDP House of Representatives candidate for Isoko Federal Constituency in the 2023 general elections, Ajiri-Oghene Ukodhiko, commended government’s efforts towards ensuring adequate support and security of lives of the people.

They promised to maintain close contact with the displaced persons, even as they expressed optimism that the trying times will soon be over to enable the affected constituents return to their traditional homes.