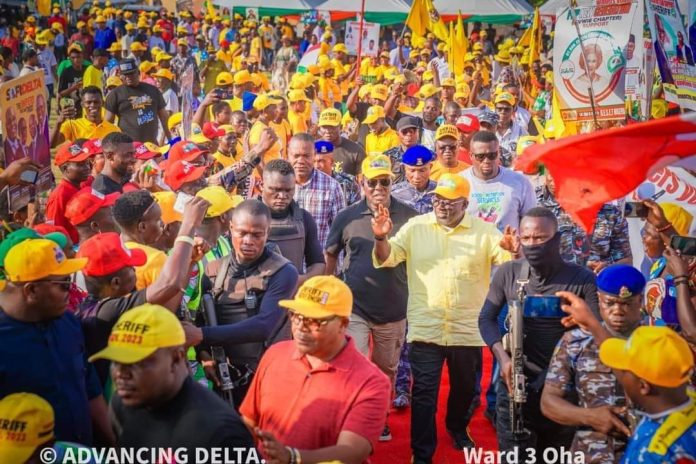 The Delta State PDP Governorship Candidate for the 2023 general elections and Speaker of the State House of Assembly Rt. Hon. Sheriff Francis Orohwedor Oborevwori, has hailed Mr. John Ewhubare Siakpere, Founder and Director General of Team Siakpere for Sheriff Oborevwori 2023, for his support for his Gubernatorial ambition.

Rt. Hon. Oborevwori, while speaking in Ward 5 (Agholokpe) in his ongoing Ward–to-Ward campaigns, said that though Mr. John Ewhubare Siakpere is based in the United Kingdom, he has remained focused on his support for his Gubernatorial ambition in the State.

Speaking further in Ward 5 (Agholokpe) where members of the Team Siakpere For Sheriff Oborevwori 2023 stole the show with their heavy presence, Rt. Hon. Oborevwori who is also the National Deputy Chairman of the Conference of Speakers of State Legislatures of Nigeria said that; “I am so happy coming here today. I can see the hands of Mr. John Ewhubare Siakpere, the Founder and Director General of Team Siakpere for Sheriff Oborevwori 2023. This Ward has never failed before and I am so happy with Mr. Siakpere and the other stakeholders. Siakepere is a wonderful person. He has been supporting this project for over a year now. God will continue to strengthen him for all you are doing for our party”.

“The first time I met Mr. John Ewhubare Siakpere in London one year ago, I told him, you are not a politician, why are you doing it? He said he is doing it for the interest of the Okpe people. So, it is not about Sheriff, it is about the Kingdom. He has done very well. To get money is difficult, and for somebody to sustain the spending over the years, he has done very well.

“The Team Siakpere for Sheriff is not my personal project. The whole essence is to say they will support anybody from Okpe Kingdom that will run for Governor of Delta State. The agenda is not for Sheriff. The agenda is for the Kingdom. God will bless him,” Rt. Hon. Oborevwori said.

The Chairman of Team Siakpere For Sheriff Oborevwori, Hon. Akpojohare Donald, who represented Mr. John Ewhubare described the Delta State PDP Governorship Candidate, Rt. Hon. Oborevwori as a square peg in a square hole, saying that he can meet the needs of the people if elected the next Governor of the State.

Hon. Akpojohare who was flanked by the Vice Chairman of the group, Hon. Oveghere Jackson, speaking to newsmen at the ceremony, noted that the PDP Governorship Candidate is a Unifier and Pan-Deltan poised to consolidate on the laudable achievements of the Delta State Governor, Senator, Dr. Ifeanyi Okowa.

“Team Siakpere group is a full-time believer of the Oborevwori’s vision of putting Delta State ahead of other States in all areas of economic and social development. We as a Support Group believe in all the Candidates presented by the Peoples Democratic Party who are committed to the task of rescuing Nigeria from the present situation we have found ourselves”, he stated.

Also, a leader in the Team Siakpere for Sheriff Oborevwori, Prof. David Ejenobo, equally solicited votes for the PDP Governorship Candidate, Rt. Hon. Sheriff Oborevwori, noting that he possesses the capacity to pilot the affairs of the State to enviable heights.

The Delta State PDP Chairman, Olorogun Kingsley Esiso enjoined Deltans to vote out the All Progressives Congress (APC) in the 2023 general elections, adding that the party has brought tears, sorrow, and blood to Nigerians and urged the people to vote for the PDP Candidates all-the-way.

The PDP Delta Central Senatorial Candidate, Chief Ighoyota Amori, noted that Okpe/Sapele/Uvwie and Ughelli North/Ughelli South/Udu Federal Constituencies had both represented Urhobo at different times in the Senate, “so I urge all of you to vote for me for Senate, come 2023 and other candidates of the PDP”

Rt. Hon. Evelyn Omavowan Oboro Esq, PDP House of Representatives Candidate, Okpe/Sapele/Uvwie Federal Constituency, said Nigeria was a better Country when PDP was in power and solicited for herself and all candidates of the PDP in the 2023 general elections.

Former Works Commissioner in the State, Chief James Augoye, PDP House of Assembly Candidate for Okpe State Constituency, called on the people to vote massively for all the candidates of the PDP next year.

Prominent leaders and stakeholders in the visited Wards, including Hon. Efe Afe, member representing Okpe/Sapele /Uvwie Federal Constituency, Barrister Isaac Itebu, Prince Gordons Ejinyere, Chief Asini, and a host of others, while predicting victory for all PDP candidates in the 2023 general elections called on the electorate to make good use of their PVCs next year.