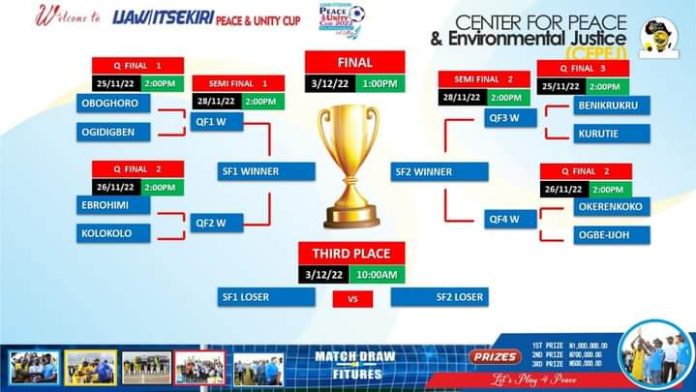 A renowned human and environmental justice advocate, Comrade Chief Mulade Sheriff disclosed this to newsmen in Warri, adding that dignitaries from all walks of life are expected including ex international football stars.

According to Chief Mulade, the Delta State Governor, Dr Ifeanyi Okowa will be the Special Guest of Honour, while the Olu of Warri, Ogiame Atuwatse III; the Pere of Gbaramatu Kingdom, Oboro Gbaran the II, Aketekpe, Agadagba; the Pere Ama Okusu of Ogbe Ijoh Warri Kingdom; as well as the Pere of Egbema Kingdom, Agadagba; and a host of others, will be the Royal Fathers of the Day at the ceremony.

The peace advocate called on well-meaning Deltans, particularly the Ijaw and Itsekiri ethnic nationalities, to mobilize enmass to the event by showing commitment towards deepening and sustaining peaceful coexistence between both ethnic groups.

Chief Mulade, who is the National Coordinator of Center for Peace and Environmental Justice, CEPEJ, an NGO, assured all participating communities that CEPEJ would remain committed and supportive towards deepening the unity, as Ijaw and Itsekiri are the economic live wires of Delta State and the Niger Delta Region.