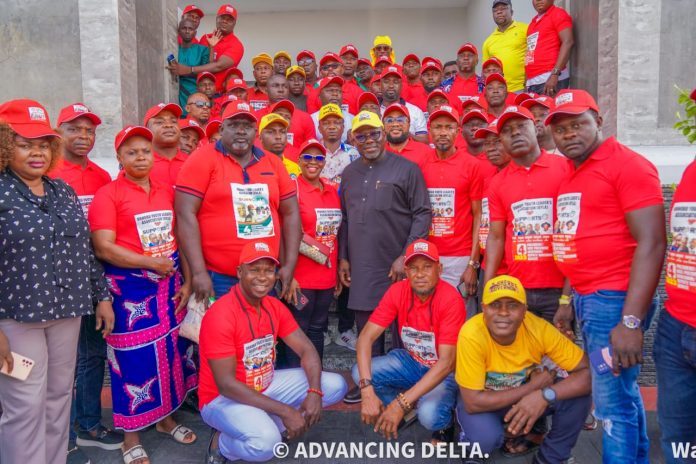 Acting President of Urhobo Youth Leaders Association, Chief Samuel Onoriode Agbatumo, who spoke on behalf of Members of the Association when they paid a solidarity visit to the Delta State PDP Governorship Candidate and Speaker of the State House of Assembly, Rt Hon Sheriff Oborevwori, in his Osubi residence, said that they are solidly behind the PDP Governorship flag bearer.

He said; “We are here to unveil our campaign structures; we are here to show our commitment that Urhobo nation is with and we are going to work assiduously to ensure that he is delivered by Urhobo nation. We are standing solidly behind the election of the Delta State PDP Governorship Candidate, Rt Hon Sheriff Oborevwori. We are going to make our little contributions towards his election as the next Governor of the state”.

“PDP is the ruling party in the state and will continue to rule the state. We are also reaching out to other ethnic nationalities to support the election of the Delta State PDP Governorship Candidate for the 2023 governorship Election, Rt Hon Oborevwori. We are going to different kingdoms, market to market to canvass support for him. We will ensure that he is fully delivered”, he added.

Also speaking, Chief Anthony Ofoni, Commissioner for Project Monitoring said that the election of Rt Hon Oborevwori is a done deal, describing him as a simple and down to earth man.

“As far as the state is concerned, he will be able to pilot the affairs of the state to the admiration of all Deltans because he is learning from the state Governor, Senator Dr Ifeanyi Okowa. The 24 Kingdoms in Urhobo are supporting the PDP Governorship Candidate because of his good heart and the love he has for the people”, the Commissioner said.

Responding, Rt Hon Oborevwori, expressed gratitude to members of the Association for all they have been doing towards his election as the next Governor of the state.

In his words; “I want to sincerely thank all members of the Urhobo Youth Leaders Association for the show of love and support. You people have been very supportive and do not relent in whatever you are doing in this Advancing Delta project”.