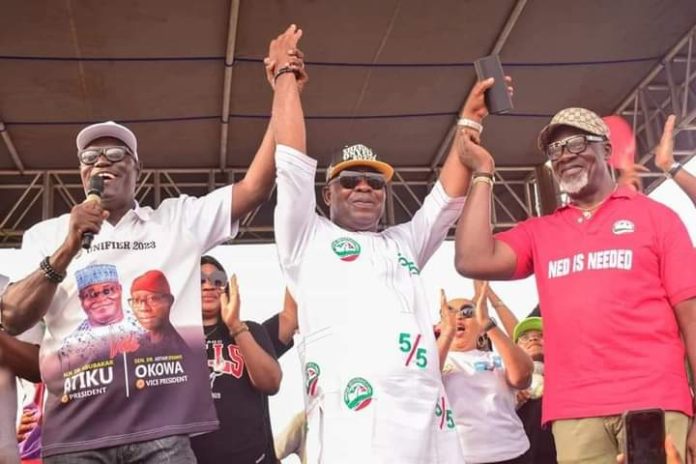 As the political activities are being intensified across the country less than 90 days into the 2023 general elections, in this report, BARTH OZAH takes a look at PDP activities in Ndokwa West LGA.

Politicians and political parties world over have always look forward for a rally or declaration before, during or after elections.

Rallies have always been an opportunity for a reunion of a sort by politicians, it is also used to demonstrate strengths and readiness for elections. Most importantly, it is used to showcase ones achievements, sell party’s ideology, programmes and to woo new supporters or voters.

However, following the inauguration of the PDP campaign committee in Ndokwa West LGA, fortnight ago and the subsequent appointment of Chief Sam Osasa as the campaign coordinator, the aim of the party was quite lucid – not only to emerged victorious at the polls but to also re-enact its dominance in the area.

To achieve this, the party first decided to settled for a coordinator who is versed and experienced in the grassroots politics.

While accepting the onerous tasks of leading the campaign to victory in a well attended ceremony at kwale, the Ndokwa West LGA headquarters, the coordinator, Chief Osasa assured party members that no ‘stone’ shall be left untouched in the campaign processes and the build up to the elections.

In demonstration of his promise after the inauguration of his committee, he convened a meeting of the campaign committee, all political appointees as well as the peace and reconciliation team at his country home at Ndemili

Speaking at the meeting, where the agenda for the campaign tour of all the ten wards in Ndokwa West LGA was set, Osasa pointed out that; “Our LGA is a peculiar one because we have a deputy governorship candidate. Besides, the presidential election is also important to us because governor Ifeanyi Okowa who is on the joint ticket with Alh. Atiku Abubakar has shown great interest in Ndokwa West LGA, hence the need to support him.”

One vote is critical in this elections, Osasa maintained, adding that; “that is why we must work together and work very hard. Every ward should device a means to resolve every issue.”

According to him; “Ndokwa nation has been working for years to get to this stage of having a governor or deputy but today, God has given it to us on a plater of gold. We must go and appeal to every agreived party members. The primary is over and it is gone hence we must move on as a party.”

While appealing for the understanding and corporations of everyone, Chief Osasa stated; “politics is a life thing and nobody knows tomorrow as to what will happen, ten years ago nobody knew that Monday Onyeme will be in this position today. As you work hard today who knows it could be your turn tomorrow.”

The Chairman of Peace and Reconciliation Committee, Chief Festus Ochonogor, the state Commissioner for Housing, who spoke eloquently on the needs to achieve a cohesive campaign stated that peace and reconciliation must be driven from the ward level.

For him, campaign cannot achieve much without reconciliation even as he implored the political appointees in the LGA to join hands in the process.

“There is no way people cannot be agreived or be offended one way or another in politics, but there must be a middle point or forgiveness to enable us move forward. The appointees are the eyes of government in the various wards.

And irrespective of their condition they must help to organise the party and support the process of reconciliation.”

Continuing; “Primary elections involves more than one person and when a candidate has emerged we must work together and that makes us one family. We don’t want to find thing difficult during elections that is why we must resolve our differences and once we get the buy-in of the appointees peace will be easy to achieve.”

The campaign committee first major task was to embarked on the inauguration of campaign structures across the ten wards, where Chief Osasa reiterated the needs for hardwork, unity and steadfastness to achieve resounding success at the polls.

Following the successful inauguration of the wards campaign committees, the stage was then set for the Delta North Campaign Rallies in the LGA.

Consequently, the rallies commenced on 1st Dec. in a positive note with the visits of all the party candidates to wards 6, 7, 4, 2 and 3 in the first day of the campaign with massive turn out of party supporters. The rallies equally, continued on the 2nd Dec. with the visits to wards 1, 10, 8, 9, and culminated in what was described as the mother-of-all rallies in ward 5, the home of the deputy governorship candidate.

Chairman of the party in Delta State, Barr. Kingsley Esiso who led the PDP rally at Ward 5, Onicha Ukwuani, told the teaming growd that, Nigerians are happy that PDP is fielding Alhaji Atiku Abubakar and Governor Ifeanyi Okowa to rescue and reset country.

“This is a rescue mission by the PDP and it is already successful because the All Progressives Congress, APC, made Nigeria to be very sick and APC went and brought someone who is not healthy to take over, to make Nigeria worse, so, Nigerians are happy that Atiku and Okowa are out to rescue them.

He disclosed that the PDP is fielding qualified people to contest in the elections, stating, “we have someone who is a Pan-Deltan contesting for Governor, not someone who cannot see beyond his village, not a mace thief who can steal anything as our Governor.

“Deputy Governor is someone who will be in a good position to advise the Governor, that is why we have Chief Monday Onyeme, an experienced man, not someone who has no experience in management.

“Vote for all the candidates of PDP, vote Prince Ned Nwoko for Senate, Hon. Nnamdi Ezechi for House of Representatives, Hon. Charles Emetulu for House of Assembly and we will have PDP five-over-five.” Esiso stated amid thunderous ovations from the mammoth growd.

Apparently, as the count down begins, one thing that is certain is that the PDP candidates will emerged victorious at the elections in Ndokwa West LGA., going by the strategies already put in place as well as calibre of the candidates for the elections.