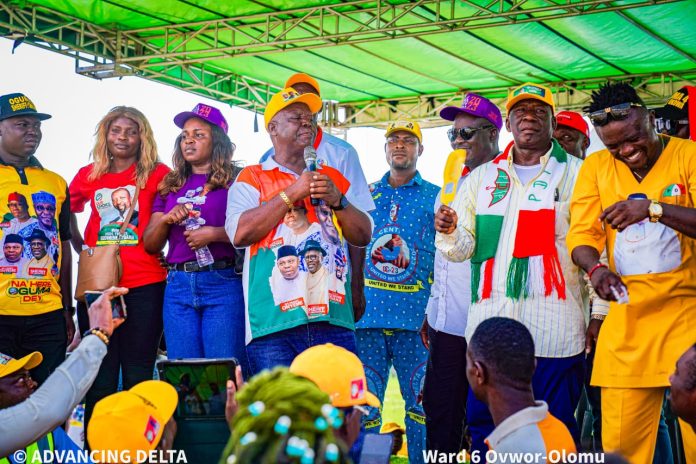 A chieftain of Peoples Democratic Party, PDP in Delta State, Olorogun John Oguma has called for massive votes for all PDP candidates in the forthcoming general elections.

Olorogun Oguma who made the call while addressing a mammoth crowd of indigenes and residents of the state during the PDP ward-to-ward campaign rally at Ovwor-Olomu in Ughelli South Local Government Area, said enemies of progress have no space in the state.

He explained that the PDP government in the state has done so much in entrenching all round development across the state and would continue in that stride in the next political dispensation.

Stressing that Ughelli South is completely for PDP, Oguma urged the people to resist the All Progressives Congress, APC with its fake and failed promises but mobilize total support and votes for the candidates of the PDP from House of Assembly election to the presidency.

He said the laudable achievements of Governor Ifeanyi Okowa’s led administration in the state has made campaigns for PDP much easier, saying that Delta State producing the next Vice President of the federal republic of Nigeria will attract unprecedented growth and development to the state.

Olorogun Oguma who played host to the campaign team in Ovwor, emphasized that Olomu is the home of the PDP, adding that it is the destiny of Chief Sheriff Oborevwori to be Governor in 2023.

He also stated that it is the destiny of Alhaji Atiku Abubakar and Governor Ifeanyi Okowa to be President and Vice President of Nigeria in 2023, maintaining that the duo would change the present sad narratives in Nigeria to a prosperous nation.

Speaking further while addressing several women and youths support groups who were on ground to join him receive the PDP campaign team, Olorogun Oguma, described Chief Sheriff Oborevwori as an illustrious son of Olomu, adding that ‘Igboze’, the founder of Olomu gave birth to Okpe, where Oborevwori hails from.

He urged the people to vote out APC at all levels, adding that the APC brought hunger, poverty, insecurity and disunity to the country.

Olorogun Oguma reminded the people of the need to go collect their Permanent Voters Cards, PVCs, to enable them not only to vote but to vote for PDP candidates in the 2023 general elections, stressing that the target is 5 over 5 victory.

The event witnessed by thousands of PDP faithfuls across the state saw harvests APC and other political parties members in Delta state to PDP.