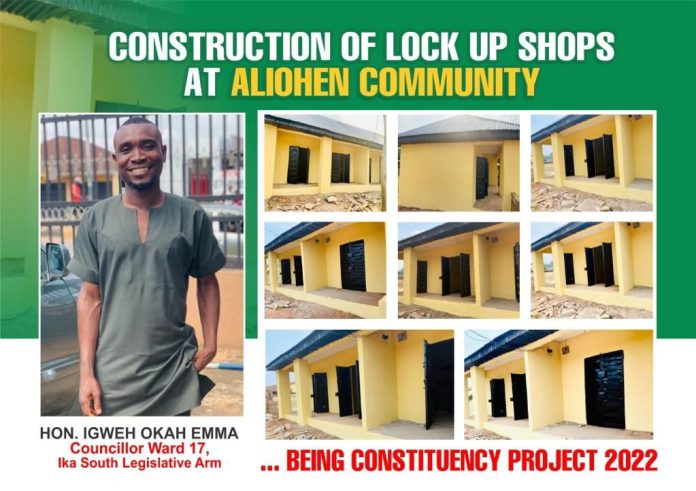 Hon. Okah who disclosed this at Aliohen Community, Abavo kingdom during inauguration of a newly built lock up shops as his constituency projects, averred his determination to change the political trajectories of the past and injecting more people oriented projects to his people.

The young vibrant legislator who is also an event manager and business coach, expressed gratitude to his people for the mandate given him to serve as councillor, Okah vowed that he will continue to identify with his people to attract more meaningful development to his people.

According to him, “I must appreciate the state Governor and Vice-Presidential candidate of the People’s Democratic Party, PDP, by the special grace of God, the incoming vice-president, Sen. ,Dr Ifeanyi Okowa (CON), the Executive Chairman , Ika South Local Government Council, Hon Sunny Tatabuzogwu for the grant that facilited the constituency Project.”

He also expressed his heartfelt gratitude to Rt. Hon. ,Barr Martin Okonta (PhD) for what he termed his fatherly role and encouragement affirming that he remain eternally appreciative.

Chairman, Aliohen Community, Mr Felix Odeh who received the keys on behalf of the community noted that they have no doubt that Hon. Igweh Emmanuel Okah has done marvellously well as a councillor while assuring him of the Community support in all his political endeavours.

He noted that one good turn deserves another even as he asked God to guide, preserve, promote and protect the donor with his family .