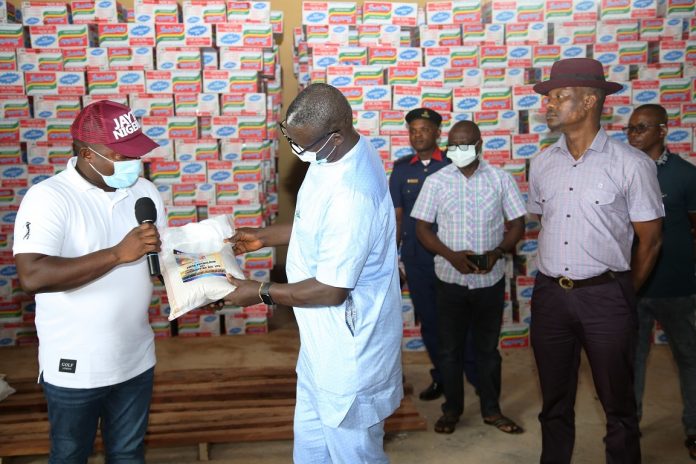 To cushion the effects of the lockdown in Delta, which became effective on Wednesday, to stem the spread of Coronavirus to the state, the state government on Monday announced that it had established a food bank in the state.

This was made known on Monday by the state’s Commissioner for Information, Mr Charles Aniagwu, while briefing newsmen after an enlarged meeting of the Central Committee On Managing and Containing The Coronavirus Pandemic In Delta, presided over by the Chairman and Governor of the State, Sen, (Dr) Ifeanyi Okowa, in Asaba.

Aniagwu, who was with his Bureau for Special Duties counterpart, Mr Mofe Pirah and Chairman of Association of Local Government of Nigeria (ALGON) in  the state, Mr Itiako Ikpokpo, said that aside the food bank, all political appointees in the state would forfeit their one month Subvention to their offices as contribution to the funds to provide palliatives to the people.

According to him, committees are also to be set up at the State, local government, ward and unit levels to ensure that the food items get to all, especially the vulnerable in the society.

“Deltans were urged to continue with the cooperation as there is no single case of the disease in the state, and we thank God and pray that there is no incident.

“The situation calls for a lot of sacrifice and Deltans were commended for their sacrifice and the patience, and as a way to cushion the effects of the lockdown, a food bank has been set up and committees will be set up at the local government, ward and unit levels to ensure that the food gets to everybody.

“All political appointees in the State will also, sacrifice one month subvention as part of their contributions to ameliorating the effects of the virus.”

In his contribution, Pirah told journalist that the state government was not going to give cash to the people, saying“ what every home needs now is food and we have been receiving food items and different donations from individuals and corporate organisations at our food bank in Ibusa.

“Food will get to the needy, people who cannot make purchase, but we should be patient and know that the lockdown will soon come to an end.

“At the meeting, government sympathized with the family of the unfortunate incident in Warri and called for calm as the law will take its course.”

On his part, Ikpokpo recalled that the lockdown began in the state about a week ago, and said that the only solution to the virus currently was to check its spread.

“We still have some pockets of people who wander out of their homes during this lockdown; although our Governor has never advocated for the use of force, we appeal to all Deltans to obey instructions.

“We are expanding the market hours to between 8a.m. and 2 pm, same is applicable to petrol stations because our Governor is concerned about  the welfare of Deltans and he is working to ensure that in spite of the fact that the situation was not caused by anybody, the effects will not be so much.

“People at the border towns of Alifekede, Mbiri, Ologbo and Idumuje Ugboko should be vigilant so that visitors will not come through there and put all of us at risk.

“Deltans should be vigilant and report any person who enters the country recently and any case of extortion should be reported immediately because, the government is very proactive and citizens have a lot of roles to play for us to be safe,” he said.

At the food bank, items were seen being discharged from trucks and the Commissioner, Bureau for Special Duties, Mofe Pirah, who received the goods on behalf of the state government, expressed gratitude to the donor, Jayta Petroleum and Commodities Nigeria Limited.

He stated that the firm, Mercyland, a church in Warri, among others, have made donations that ranged from bags of rice, tubers of yams to noodles to complement  the items already procured by the state government  for distribution to the people.

The Group Managing Director of Jayta Petroleum and Commodities Nigeria Limited, Mr Emmanuel Onyenweli Akuba, stated that donating the food items was very important at this period of the pandemic , adding that it was meant to assist the state government in reaching out to the needy in the society.