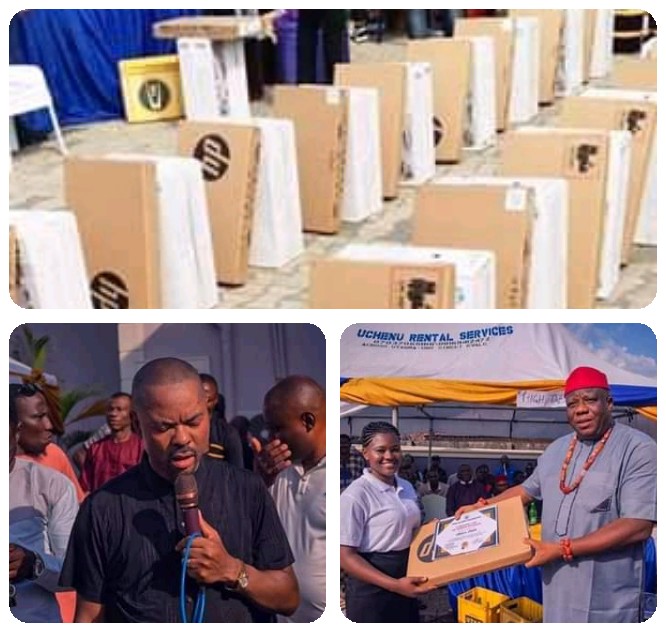 By Enweliku Kent-In response to Governor Ifeanyi Okowa’s call on political office holders in the state to compliment government’s efforts at empowering the people, particularly the youth, Executive Assistant to the Governor on Youth Development, Hon Nnamdi Ezechi, at the weekend in Kwale, presented starter packs to 27 youths trained in ICT and Cable/Dish installation.

The gesture, which came through his Ezechi Hope Foundation,.was the third batch, with 67 beneficiaries so far; 61 in ICT and 6 in Cable/Dish installation.

The Foundation had also awarded scholarship to 5 secondary school students up to University level. Speaking at the presentation ceremony, which he said was in commemoration of his birth anniversary, Honourable Ezechi said the Foundation was initiated basically to enhance the living standard of the people through empowerment and skill acquisition.

He stated that he was inspired by the exemplary leadership of the State Governor, Senator Ifeanyi Okowa, who had done a lot to take the youth off the street with the job and wealth creation programmes of his administration.
The Executive Assistant, who promised to sustain the programme, thanked the Governor for his support and urged the beneficiaries to use the knowledge acquired during their training and the starter packs given to them to establish themselves and create jobs for others.

Some of the beneficiaries who spoke to our reporter, thanked Honourable Ezechi for teaching them how to fish and the Governor for giving him the opportunity to serve and touch lives.They promised to use the opportunity offered them to contribute to the development of the local economy and the state at large.