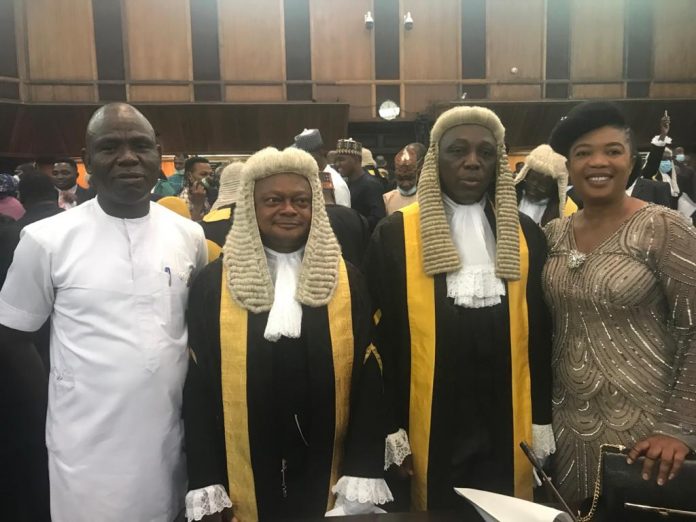 Governor Ifeanyi Okowa has congratulated the seven Deltans that were on Monday 14/12/2020 conferred with the rank of Senior Advocates of Nigeria, SAN

Governor Okowa said with the additional number of seven new silks, it goes without saying that lawyers and judges from Delta have continued to do the state proud.

The seven Deltans were among the seventy two that were conferred with the rank of Senior Advocates of Nigeria, SAN.

Governor Okowa had in his goodwill message to the commencement of the 2020-2021 legal year in the state, expressed joy over the conferment of the seven Deltans, including the State’s Attorney-General and Commissioner for Justice, Mr Peter Mrakpor, to the rank of SAN.

The induction ceremony was held at the conference hall of the Supreme Court, Abuja and was witnessed by cream de la cream of the society, including relatives of the new SANs

The event had commenced with a roll call of the successful applicants, as announced by the Legal Practitioners’ Privileges Committee, LPPC.

The State’s Attorney-General and Commissioner for Justice, Mr Peter Mrakpor, said after thirty years of legal practice, it was a dream come through to be conferred with the rank of Senior Advocate of Nigeria, SAN.

In the same vein, Mr Uzoma Azikiwe, who was called to Bar in 1986, explained that as a senior lawyer, he has enormous responsibility to the legal profession, saying that he is looking at the future with much excitements.

Mr Mrakpor and Mr Azikiwe, while thanking God for their new ranks, said they were immensely grateful to all the Justices of the Supreme Court and the Legal Practitioners’ Privileges Committee for finding them worthy for the rank of SAN.

Former Deputy Governor of Delta State, Prof Amos Utuama, SAN, the state Commissioner for Finance, Chief Fidelix Tilije, Economic Planning, Mr Barry Gbe, and Culture and Tourism, Mr Lawrence Ejiofor, said only those that distinguished themselves in the Court Room Advocacy can rise to the peak of the legal practice.

They said Mrakpor and the other six Deltans belonged to that class, and urged them to remain focused and enhance the quality of their professionalism.

The Director-General, Delta State Capital Development Agency and wife of the Attorney-General and Commissioner for Justice. Mrs Onyemaechi Mrakpor and another notable Deltan, Deacon Mathew Okwaje, paid glowing tributes to the new silks for making the state proud.

Mrs Mrakpor and Deacon Okwaje expressed gratitude to God for elevating the six senior lawyers to the peak of their carrier.

The State Chief Judge, Justice Marshall Mokoru, who was represented by Justice Joe Egwu, while congratulating the new Senior Advocates, charged them to continue to play greater roles in advancing the legal practice.