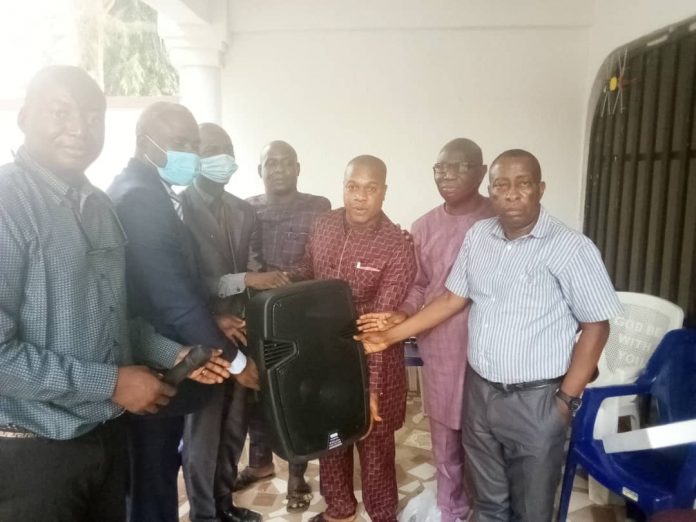 Delta State Chairman of the Nigeria Union of Journalists (NUJ), Comrade Michael Ikeogwu, has commended the state Head of Service (HOS), Mr. Reginald Bayoko mni, for redeeming his pledge to provide a public address equipment to the council of the union in the state.

Comrade Ikeogwu gave the commendation while receiving a portable public address equipment donated by the HOS to the NUJ at the temporary press centre of the union in Asaba, the state capital.

An elated Comrade Ikeogwu said that the HOS has distanced himself from those that would promise without keeping their word, adding that not only would the council of the union in the state reciprocate the good gesture by ensuring a robust publicity of activities of the office of the HOS, but that his timely assistance to the council would remain indelible in the history of the union in the state.

While calling on other public spirited individuals and corporate entities in the state to emulate the kind gesture of the HOS towards strengthening the all importance function of the Fourth Estate of the Realm being the Watchdog of the society, Comrade Ikeogwu said that the union would continue to set the needed agenda for not only Delta State, but Nigeria and beyond.

Presenting the donated gift, the HOS in a letter signed by Mr. Nwabeze Kennedy for the HOS and read by the Public Relations Officer in the office of the HOS, Mr Darlington Ivovi, said that the donation was in fulfilment of the earlier promise to the union to donate the item requested for when the leadership of the Comrade Ikeogwu paid him a courtesy visit in December, 2020 in his office , adding that the council should make good use of the equipment for not only the uplifting of the ethics of Journalism, but the actualisation of the noble ideals of the Stronger Delta vision of the Okowa Administration.

Present during the occasion were the Peace Ambassador of the NUJ, Comrade Osita Biose, the Vice Chairman of the Council, Comrade Salvation Ogono, the Auditor, Comrade Celestine Afokobah, the Assistance Public Relations Officer, Office of the HOS, Comrade Ken Obieh, the Chairman of the Federal Information Chapel, Comrade Abel Johngold, the Director of Communications to the Chairman, Comrade Johnson Ebigide, among others.