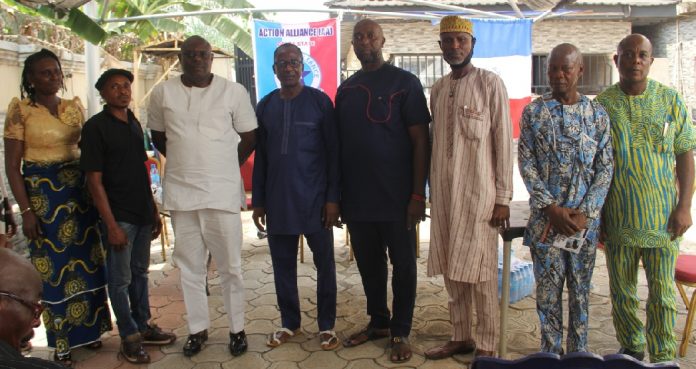 The Action Alliance  AA, in Delta state has elected new State Working Committee (SWC), as well as Local Government and Ward Executives in the state.

The party Congress which was held on Saturday 30th January, 2021 in Asaba was witnessed by officials of the Independent National Electoral Commission (INEC), as well as observers and, the National Chairman of the party Hon. Adekunle Rufai Omoaje who was represented by the National Publicity Secretary, Comrade Odu Omotosho.

The National Publicity Secretary who had earlier dissolved the state Caretaker Committee led by Comrade Emeka Bidokwu, charged the new leadership to woo more members to the party for the enormous task ahead.

Comrade Omotosho posited that the Congress adopted affirmative method of electing the new leaders due to the unanimous decisions of party faithful.

In his acceptance speech, the State Chairman who doubles as Delta state Chairman of Inter-Party Advisory Council IPAC, Comrade Bidokwu reaffirmed his commitment to lead the party to victory in the March 6th Delta Council poll and 2023 general elections.

The state chairman noted that the AA believes in the principle of inclusiveness, saying the leaders in the state was determined to reach out to everyone to join the party.

Bidokwu, who said the exercise represented a new dawn in the party, appealed to all members and leaders of the party in the state to join hands to sensitise the people of the state on the vision of the his administration in the next three years.

He said with the abysmal performance of other political parties in the country, there is no alternative to AA come 2023 general elections because the party would defeat every political parties ganging-up against her victory in 2023.