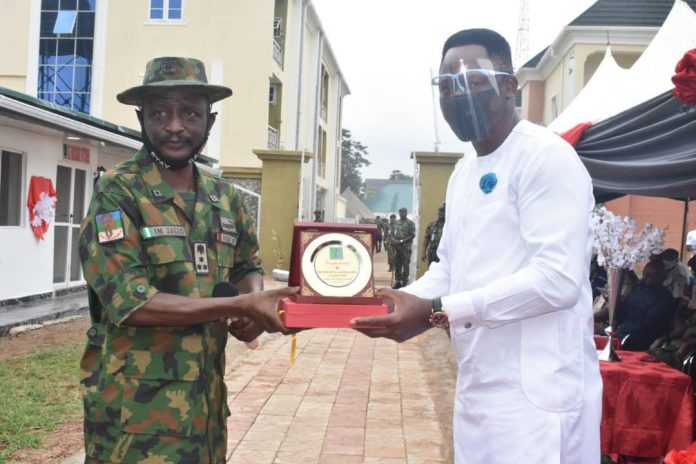 The 63rd brigade of the Nigerian Army today in Asaba commended the efforts and supports of Rt. Hon. Friday Ossai Osanebi, member representing Ndokwa East State constituency in the Delta State House of Assembly for his contributions and supports to the brigade and the general populace.

Presenting the award to the lawmaker and empowerment master, the Commander of the 63rd Brigade of the Nigerian Army, Brig. Gen. Ibrahim M Jalo thanked the immediate past Deputy Speaker for his kind gestures and magnanimity always.

Osanebi who was surprised at the award was honoured during the commissioning of recently completed projects in the brigade temporary complex Asaba, to mark this year’s Nigerian Army Day Celebration ( NADCEL).

Osanebi had joined the commender in receiving the Governor of Delta State Senator Dr. Ifeanyi Okowa and the General Officer Commanding the 6th Division of the Nigerian Army ( Port Harcourt), Maj-Gen FO Agugo, for the commissioning, when he was called upon for the commendation and subsequent award.

Osanebi thanked the army for the honour and recognition, adding that the award will spur him to do more for the masses and his humble support to consolidate on government’s effort in building peace and security.

He further congratulated the Commander of the Brigade, Brig. Gen. IM Jalo on his achievements in the shortest time he was posted to the Asaba brigade, noting that the projects commissioned today will enhance a good working condition for the officers and men of the bridage.

Some of the projects commissioned today in the Brigade include a brand new medical centre with various departments, The Nigerian Army Post Exchange (NAPEX)/Kitchen, worship centres- a chapel and a mosque, a K9 kennel with dogs for special investigations. 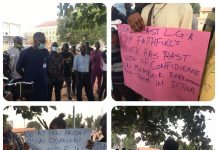