The event which attracted the Ovie of Ughelli kingdom, Oharisi 111 among other personalities was said to be the first of its kind in the area as CP Mohammed inaugurated his first project since his assumption of office as Commissioner of police in Delta State.

The CP revealed that the main aim of the project was to combat and reduce crimes at all forms in the area and its environs to the lowest level.

The Police Boss however assured the Ovie and his subjects that the new Police station would not engaged in any form of extortion from the people but guarantee peace and security against criminals as he lauded the various stakeholders that contributed to the success of the master piece edifice.

In the CP words, “last year November – December there were increased cases of kidnapping, Armed robbery and Cultism related matters within the Kingdom” as he also identified three major crimes perpetrated in the area to include Kidnapping,  Armed Robbery and cultism but assured the people that with the realisation of the new police station, insecurity will be a thing of the past in the kingdom.

Speaking, HRM. Ovie of Ughelli Kingdom,  Oharisi 111 said with the inauguration, the CP no doubt has written his name in the sand of time as he urged the people of Ufuoma to work in synergy with officers of the new police station in assurance to bringing crime to  a halt in the Kingdom.

Oharisi 111 commended Chief Dr . Isaac Akpoveta, Chairman, Delta state Contributory health Commission, for building such an edifice with state of the art facilities for the community and others for  working  hand in hand with stakeholders for the progress of the new divisional police force maintaining that Ughelli people are peace loving and hospital people.

The Monarch also appreciated Sen. Dr. Ifeanyi Okowa who has brought insecurity to halth in Delta state and in building a Stronger Delta Agenda.

Also speaking was the donor Dr. Akpoveta who explained that the gesture was to show support to the police division and strengthen its capability for curbing violent crimes, such as cultism , Armed Robbery , Kidnapping and other social vices in Ufuoma Community and other neighoring clans

Others that spoke include some council of chiefs that commended the donor and pointed out that history was made in Ofuoma community,  that Ofuama divisional police heaquarter would not only stem the tide of criminal activities but will bring peace to the kingdom and its environs.

High point of the ceremony was the inauguration of the New police station built and constructed by Dr. Isaac Akpoveta and the presentation of two Patrol Vehicle to the officers and men of the Ufuoma Divisional Police Headquarters. 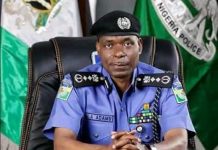